I mean, why bother? Just say what you mean, right? 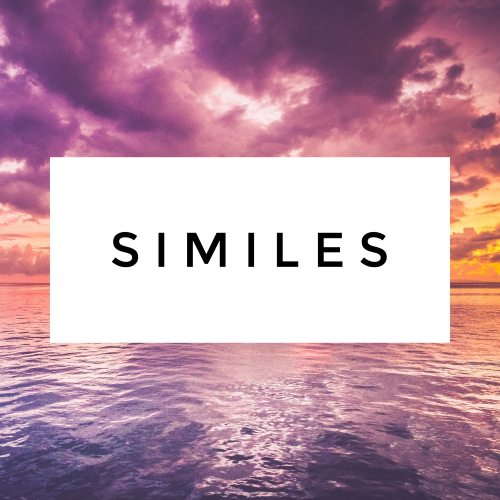 Well, I have to say I love similes. They add so much to your writing in what we call imagery. In other words, it helps the reader see, in his or her mind’s eye, what the writer is trying to describe.

So, what is a simile anyway?

A simile describes something by comparing it to something else.

I’m not talking literal comparisons like, for example, ‘the athlete was as fit as someone who trained non-stop every day’.

In this sense, you would use the simile to give an impression of the strength or speed of the athlete:
‘The athlete sprinted down the track like a cheetah chasing its prey.’

You’ve watched wildlife programmes, haven’t you? You’ve seen cheetahs when they bolt after an impala? The speed, the focus, the agility. That’s the impression you want to give about your athlete. Saying that they ran fast just doesn’t have the same effect, does it?

Let’s look at some examples from literature. See what you think to the way these authors have used similes to describe the character’s feelings or actions, or the settings.

– The corridor was like the throat of a terrifying beast and he was sliding down it into the big belly of the school hall.
– I tore into the wrapping paper like a wild animal.
– The sun hit me smartly on the face, like a bully.
– Here and there over the grass stood beautiful flowers like stars.
– The pattering increased till it sounded like sudden hail on the dry-leaf carpet spread around him.
– Johnny was white as a ghost and his eyes were wild looking like an animal in a trap.
– My throat felt like a trap had snapped down on it.
– If you get on the wrong side of Miss Trunchbull she will liquidize you like a carrot in a kitchen blender.
– Before us the narrow, sun-splotched road wound like a lazy red serpent dividing the high forest bank.

With each of these examples, you get an instant image in your mind of what the author is describing. You know immediately what they are trying to say. I love the one about Miss Trunchbull, don’t you? It tells you so much about her character. Can you guess which book that is from?

Now, as ever, it’s over to you. Here are some examples of similes that are over-used to the point that we call them cliches.

Can you think of some more interesting ways of describing them, coming up with your own ideas instead of using ones that have been written a million times over?

I’ve given you five to have a go at. Keep them with ‘as’ in the middle, or rearrange it to say, for example, ‘the picture was like…..’.

Next time when you’re writing, see if you can include a simile and note the difference it makes to your story.

Let me know how you get on.